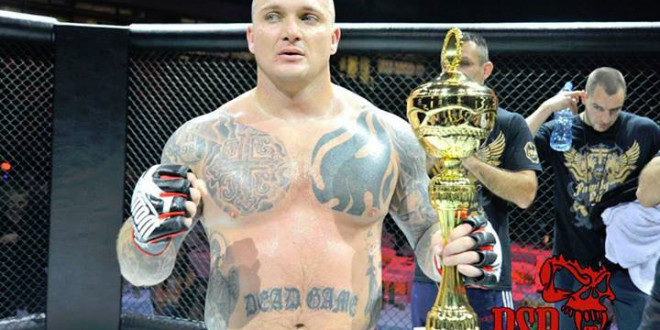 SERBIAN BATTLE CHAMPIONSHIP 2 justified expectations of the MMA fans, surpassed last year’s event and definitely set higher standards in the region when it comes to organization of MMA events. The production was at the highest level, and the audience had the opportunity to see 9 great fights.

Fight 1 – In the first fight, a Family Fight Team member from Sombor (Serbia), Ranko Karan, faced the best Israeli grappler, Elizar Tariku. Tariku started aggressively and tried to land a high kick, and then followed with hard leg kicks in the opening minutes, with Karan setting up on the outside and Tariku working from the middle. A right hook from Karan sends Tariku to the canvas, but he was quick to scramble back up. Karan managed to land a couple more right hands. Tariku followed with a takedown near the fence. After unsuccessful armbar attempt by Tariku, Karan managed to get the top position and deliver damage over the final seconds of the first round. Karan tagged Tariku at will with more right hands at the start of round two, but Tariku managed to secure yet another takedown and put Ranko Karan on the ground. Tariku got the dominant position and finished Karan by armbar.

Fight 2 – In the second fight of the tournament young Serbian prospect and a Family Fight Team member, Stefan Sekulic, had an opportunity to make his MMA debut against an experienced MMA fighter from Vrsac, Svetislav Nikolajev.  The fighters gave the fans a great and exciting fight. Nikolajev started aggressively, but Sekulic landed a takedown and tried to finish his opponent by attempting to apply a triangle choke, but Nikolajev managed to get back on his feet. They exchanged hard punches in the following minute, after which Sekulic hit yet another takedown followed by ferocious ground and pound until the end of the round. In the second round Sekulic landed couple of more right hands and managed to push his opponent against the cage. Stefan took Nikolajev down and finished the fight with an armbar in the round 2.

Fight 3 – German prospect, Nicolai Salchow, faced Marinko Stjepanovic from Serbia. After a quick exchange to start, Salchow quickly took Stjepanovic to the ground, attacked with couple of knees to the body and worked his way into the mount position. Salchow followed up with aggressive ground and pound and referee stepped in to save Stjepanovic from any further damage. Nick Salchow won via GnP in the first round.

Figh 4 – Home crowd had another chance to see one of the greatest young talents, a multiple national boxing champion and a former member of Serbian national boxing team, Branislav “Bane” Jovicic (Family Fight Team) facing an experienced Muay Thai and MMA fighter, Gojko Vukovic. Jovicic opens the round with a strong left hook counter. After a quick exchange Vukovic moved in to clinch Jovicic against the fence. Vukovic followed with a takedown near the fence, but Jovicic managed to swing his legs around and trap Vukovic in a perfect triangle choke. Vukovic taps. This was another impressive victory for Bane Jovicic.

Fight 5 – Co-Main Event – The best Serbian middleweight fighter, Damir “Dado” Mihajlovic, also made an appearance on the big MMA stage in Novi Sad, but this time he fought in the -77 kg division.  Dado is a Luta Livre black belt holder and a multiple national grappling and Brazilian jiu-jitsu champion.  He had a chance to fight many current and former UFC fighters – Hector Lombard, Eliot Marshall, Jordan Radev and Denis Stojnic. This time Dado faced dangerous fighter from Germany, Angelos “Spartan” Zampakikas. MIhajlovic started aggressively and blasted Zampakikas with a straight right hand and followed with couple of strong hooks, uppercut and knees to the body. He pushed his opponent to the cage, swept him up above his head and slammed him to the canvas. Dado was grinding away with punches and elbows and then moved to full mount. Mihajlovic continued with a series of hard right and left hands. Zampakikas managed to get back to guard, but Mihajlovic continued to tee off for the duration of the round. Round 2 – After a quick exchange Damir quickly took Zampakikas to the ground again, attacked with couple of knees to the body and worked his way into the better position. Mihajlovic was in complete control from the top, again grinding away with punches and elbows. Mihajlovic finished the round with a dangerous guillotine choke attempt, but Zampakikas managed to defend well. Round 3 – Fighters came out firing punches and Mihajlovic just quickly took him down once again. Damir landed punches to the face and body of his opponent as Zampakika unsuccessfully worked to get to his feet. MIhajlovic just dominated this round as well. Damir Mihajlovic defeated Angelos Zampakikas via unanimous decision.

Fight 6 – One of the best Serbian and European grapplers, a prominent member of the Family Fight Team, Luka Strezoski, had the opportunity to get his second career win against undefeated Dutch prospect, Ricardo van Veleen. Ricardo showed remarkable willingness and conditioning, fought hard, but simply did not have the solution to exceptional ground game of Luka Strezoski. Strezoski dominated Ricardo van Veleen throughout the fight by spending most of each round in mount position. This was another impressive performance by Family Fight Team’s Luka Strezoski.

Fight 7 – Fans had the opportunity to enjoy the performance of the Serbian crowd favorite, Dusan “Cyborg2” Dzakic against a dangerous fighter from Germany, Sven Heising. Heising came out firing punches and Dzakic just wanted to take him down, but fighter from Germany managed to secure the top position. Heising quickly managed to take Dzakic’s back and tried to finish the fight by applying a rear naked choke. Dzakic managed to defend all the attacks but Hesing spent majority of the first round in the dominant position. Round 2 – Dzakic made a flying knee attempt right away, but Heising managed to avoid it and take Dzakic down again. However, Heising leaved his neck exposed as he drove forward and Dzakic sunk in a deep guillotine choke. Hesing had to tap, and Dzakic won the fight via guillotine choke in Round 2.

Fight 8 – People in Novi Sad had a chance to see the long-awaited MMA debut of one of the best Serbian and European boxers, current IBF and WBO European boxing champion and former junior vice world champion, Geard Ajetovic, who faced a professional boxer and MMA pioneer, Misa Nikolic.  Ajetovic turned up the heat right away using excellent combos easily taking control of the fight. Geard stayed all over Nikolic, blasting him with more quick punches and one strong right hand sent Nikolic crashing to the canvas. Before Ajetovic could tack on many additional punches the referee stepped in to wave off the bout. Ajetovic won via first round KO.

Fight 9 – Main Event – The best Serbian heavyweight, Luta Livre black belt holder and a multiple grappling and Brazilian jiu-jitsu national champion, Bojan Mihajlovic, faced experienced Dutch fighter, Michael Knaap, who came as a late replacement for injured Valentijn Overeem. Knaap defeated Overeem earlier this year via first round submission. Bojan totally dominated this fight and completely negated the striking of Knaap. Knaap was unable to stop Mihajlovic at all during this fight. Bojan managed to take him down in every round and follow that by ground and pound and total control. In the 3rd round the referee took a point away after Knaap landed numerous illegal elbows to the back of Mihajlovic’s head. The fight continued and Bojan managed to finish it on top by ferocious ground and pound until the final bell of the last round. MIhajlovic just dominated his opponent and thus managed to defeat Michael Knaap via unanimous decision.